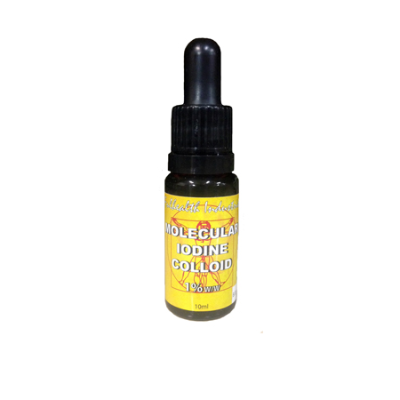 Fulhealth Industries has manufactured a new product, Molecular Iodine Colloid that can be used with any hypothyroid case. Iodine is an essential trace element for humans and is used in the synthesis of thyroid hormones.

Iodine is an essential trace element for humans. The average adult body contains between 20 and 50 mg iodine, and more than 60 percent of this is concentrated in the thyroid gland situated at the base of the neck. The rest is in thyroid hormones in the blood, ovaries and muscles. Worldwide soil distribution of iodine is extremely variable and food grown in areas of low iodine does not contain enough of the mineral to meet requirements.

What it does in the body

Thyroid gland Iodine is a component of the thyroid hormones triiodothyronine and thyroxin, which determine the metabolic rate of the body. This affects the body's conversion of food into energy and also the way energy is used. Thyroid hormones are vital for growth and development of all organs, especially the brain, reproductive organs, nerves, bones, skin, hair, nails and teeth. The thyroid is involved in protein manufacture, cholesterol synthesis, carbohydrate absorption and the conversion of carotene to vitamin A. Thyroxin is an important regulator of body weight.

Iodine is rapidly absorbed from the gut. Excesses are excreted in the urine. Deficiency Iodine deficiency leads to various illnesses which are known as iodine deficiency disorders and include hypothyroidism, goiter and cretinism.

Intakes of less than 50 mcg per day induce deficiency.

When body iodine stores are exhausted, the thyroid gland in the neck is influenced by the pituitary gland to increase its activity and can become enlarged. This swelling is known as a goiter. Other symptoms of hypothyroidism include fatigue, apathy, drowsiness, sensitivity to cold, lethargy, muscle weakness, weight gain and coarse skin. Young men and women in iodine-deficient areas are at the greatest risk of developing goiter. Deficiency of iodine is an important world health problem but is relatively rare in industrialized countries due to iodine fortification of salt. Those who still suffer from goiter may do so because they eat too many foods which block iodine utilization. These foods are known as goitrogens and include raw cabbage, kale, turnips, peanuts, soybeans and cauliflower. Drugs such as disulfiram, thiouracil, thiourea and sulfonamide can also inhibit the thyroid gland and lead to deficiency. A reduction of salt in the diet, combined with a growing consumption of manufactured food prepared using low iodine salt, may lead to an increased risk of deficiency in areas where there is little natural iodine.

Severe iodine deficiency in a mother's diet during pregnancy increases the risk of miscarriage and stillbirth. If the baby survives to term, it is likely to suffer irreversible mental retardation. This is known as cretinism and is a major cause of preventable intellectual impairment in low iodine areas.

Mildly iodine-deficient children have learning disabilities and poor motivation. The developing fetus, newborn and young children are most susceptible to the effects of an iodine- deficient diet, and treatment before conception or in early pregnancy is essential to prevent irreversible damage. Breast milk contains more iodine than formula milk and premature babies who are formula-fed may be at risk of deficiency.

This product has yet to be reviewed
To be the first to review this product simply fill out the form to the left and let us know how you feel about this product!

Back to the top